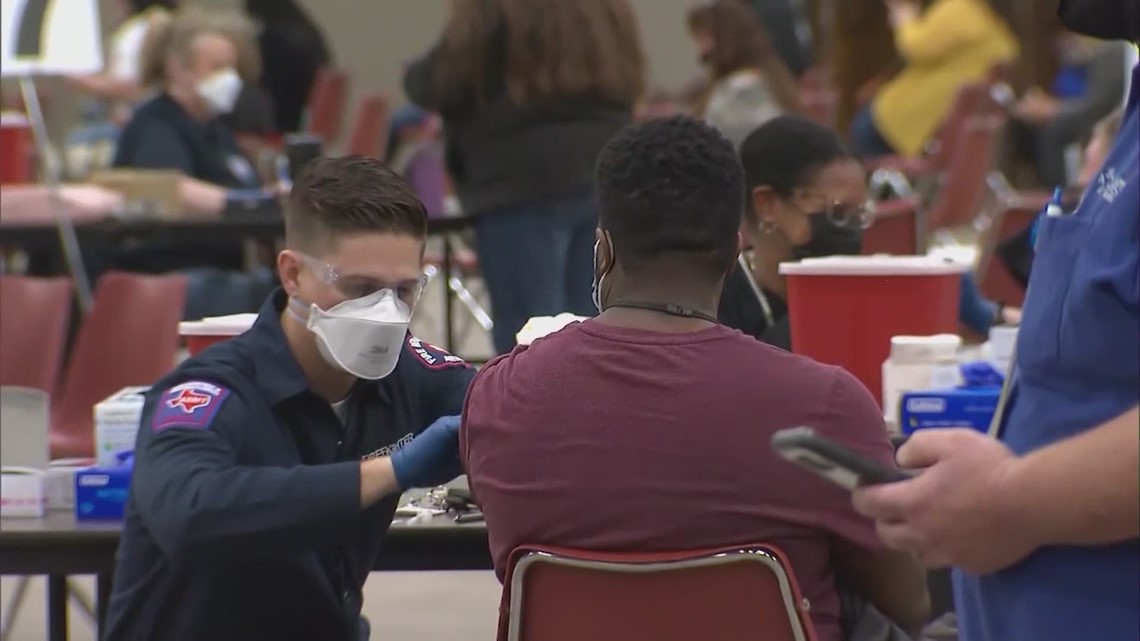 Cleburne and Arlington’s fire departments are among those who have received recognition for their smooth vaccine clinic operations.

CLEBURNE, Texas — “I think people really are enjoying it. It’s something different.”

Those are not the words you’d expect to hear when talking about a COVID-19 vaccine clinic. But for Cleburne Fire Chief Scott Lail, that’s just the reality of his department’s operation at the Cleburne Conference Center.

For about a month, this Johnson County hub has been giving people an experience to go along with their vaccine. They pipe 70s and 80s music into the conference center, for one thing.

“I think people enjoy that,” Lail said Thursday via Zoom.

“We even did polka for a little one day. They did not enjoy that,” he said, laughing.

And the shot-givers keep the mood light, lightheartedly competing with other shot-givers and joking as they call the next person up to their station.

“We’re trying to take some of the fear and anxiety out of it,” Lail said.

On top of it all, Lail said they’re keeping the average wait time around 20 minutes as they vaccinate 1,250 people a day. He said through some trial and error, they learned how many people they could vaccinate efficiently.

“The first thing we looked at is what we didn’t want to do,” he said. “We want to be successful, so we’re going to learn from other people’s mistakes.”

It’s a smooth operation with the Arlington Fire Department, too.

Between their two locations — Arlington’s Esports Stadium and Globe Life Field — they’ve given out 150,000 vaccines since late December, according to Crowson. He said often people are in and out in 30 or 40 minutes; they often come thinking they’re going to spend all day there, only to be pleasantly surprised.

“Everywhere we can tweak and adjust and speed the process up, we try to do those things,” Crowson said.

It’s a success other municipalities are asking about. When asked, Crowson said other cities, county judges and even FEMA have come to observe their practices to learn from them.

It’s also helped them earn a positive reputation with the public. Crowson said he has a stack of letters on his desk from appreciative residents. The Facebook messages are kind, too.

So kind, Crowson got emotional when talking about the feedback.

“It’s good to serve people,” he said as he choked up. “You see a lot of cases of desperate people and you want to help them, and we’re doing that. So we’re pleased with that.”

It’s a dose of humanity, given alongside the dose of the vaccine. Cleburne and Arlington’s fire departments are among those who have received recognition for their smooth vaccine clinic operations. CLEBURNE, Texas — “I think people really

Darryl Frierson of “I Only Listen to ’90s Music” Photo by Maurice Young Available on Apple Podcasts, Spotify, Podchaser, Player.fm and YouTube With its spirited Local eateries adapted to COVID-19 in a number of creative ways to stay in business while abiding by new safety guidelines. Here are four ways